Skip to main content
It looks like you're using Internet Explorer 11 or older. This website works best with modern browsers such as the latest versions of Chrome, Firefox, Safari, and Edge. If you continue with this browser, you may see unexpected results.

See below for an archive of posters for programs Patrick Barry has presented at Michigan Law in the past. 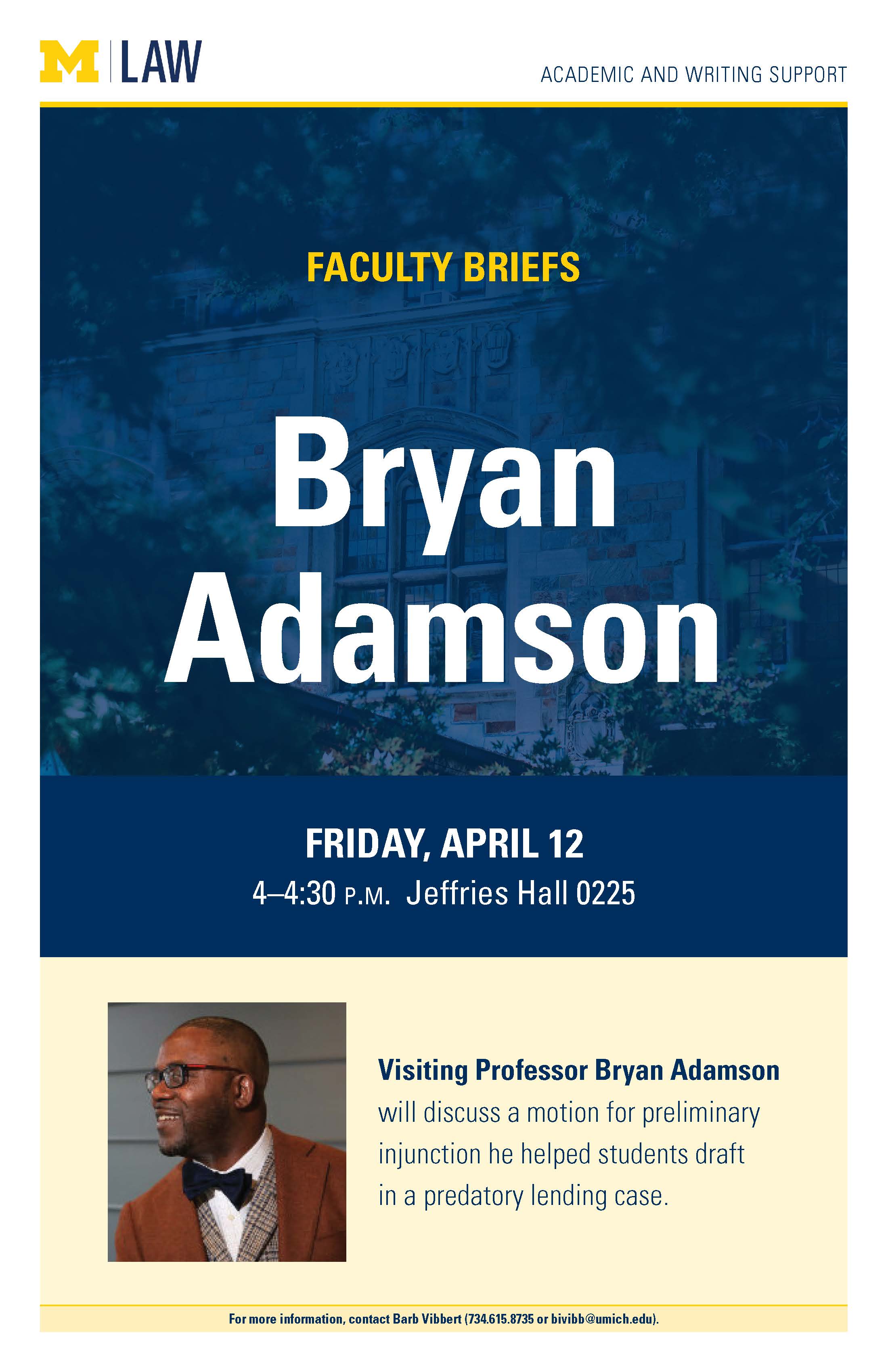 Visiting Professor Bryan Adamson will discuss a motion for preliminary injunction he helped students draft in a predatory lending case. 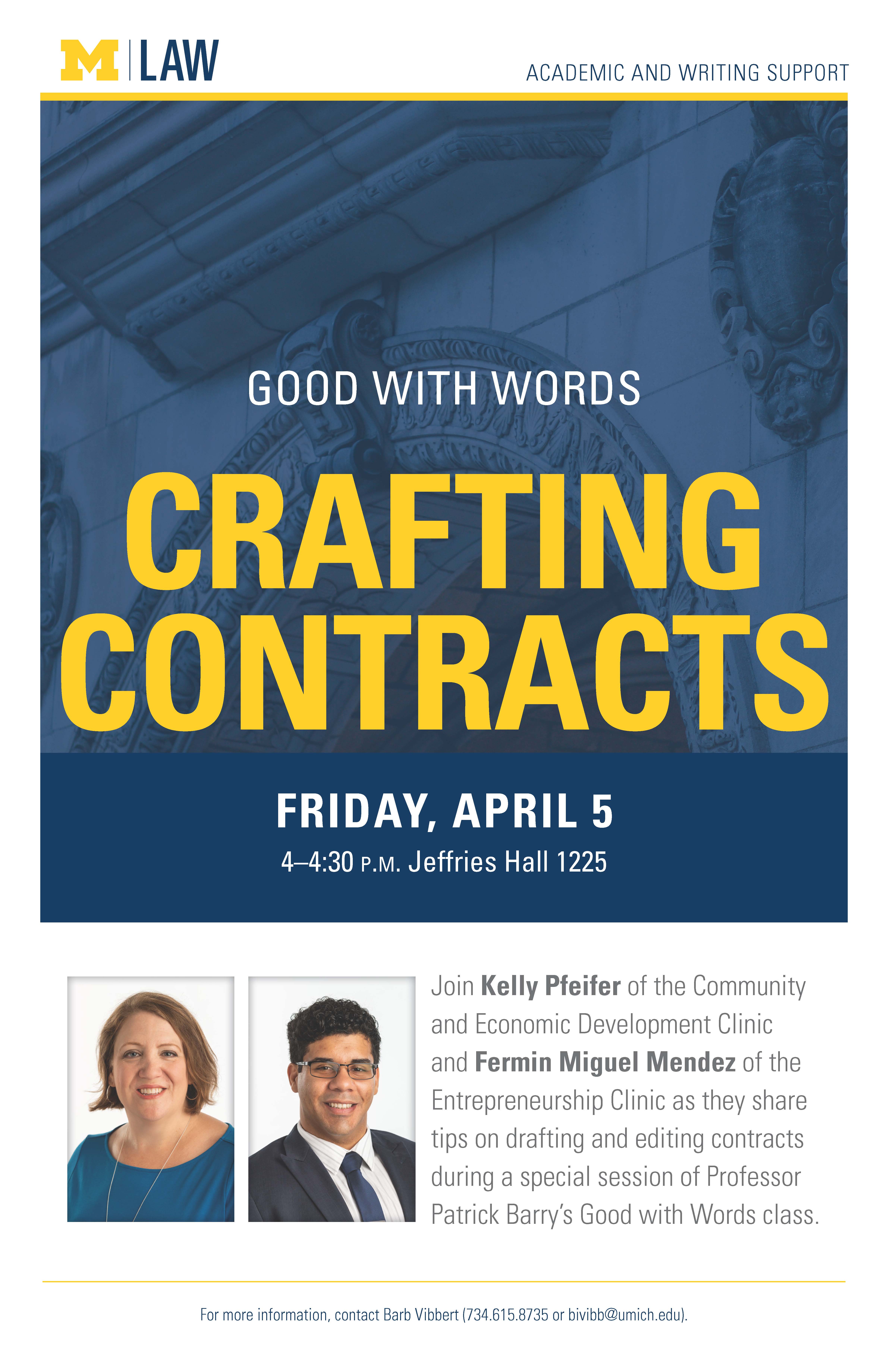 Join Kelly Pfeifer of the Community and Economic Development Clinic and Fermin Miguel Mendez of the Entrepreneurship Clinic as they share tips on drafting and editing contracts during a special session of Professor Patrick Barry’s Good with Words class. 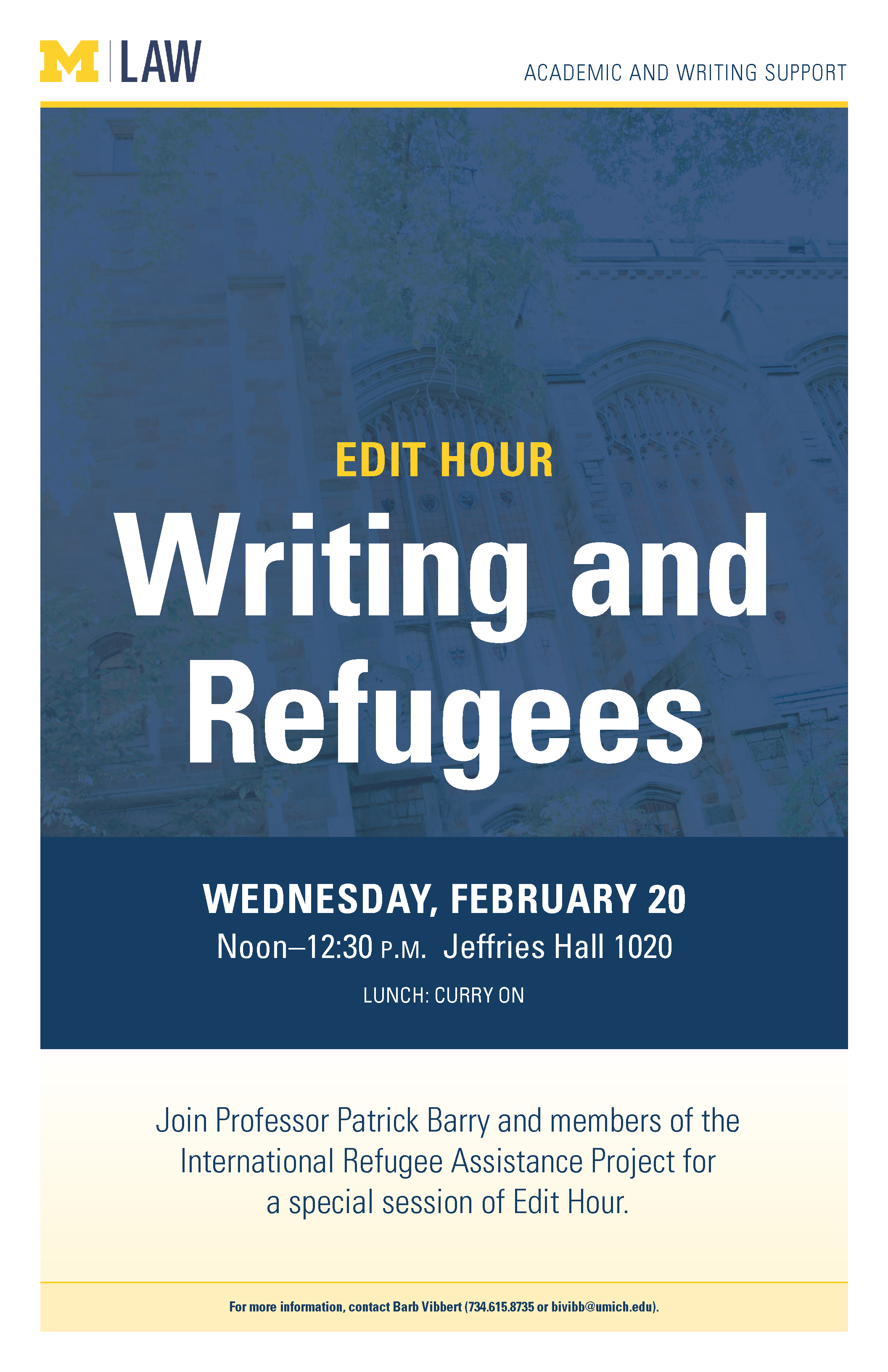 Join Professor Patrick Barry and members of the International Refugee Assistance Project for a special session of Edit Hour. 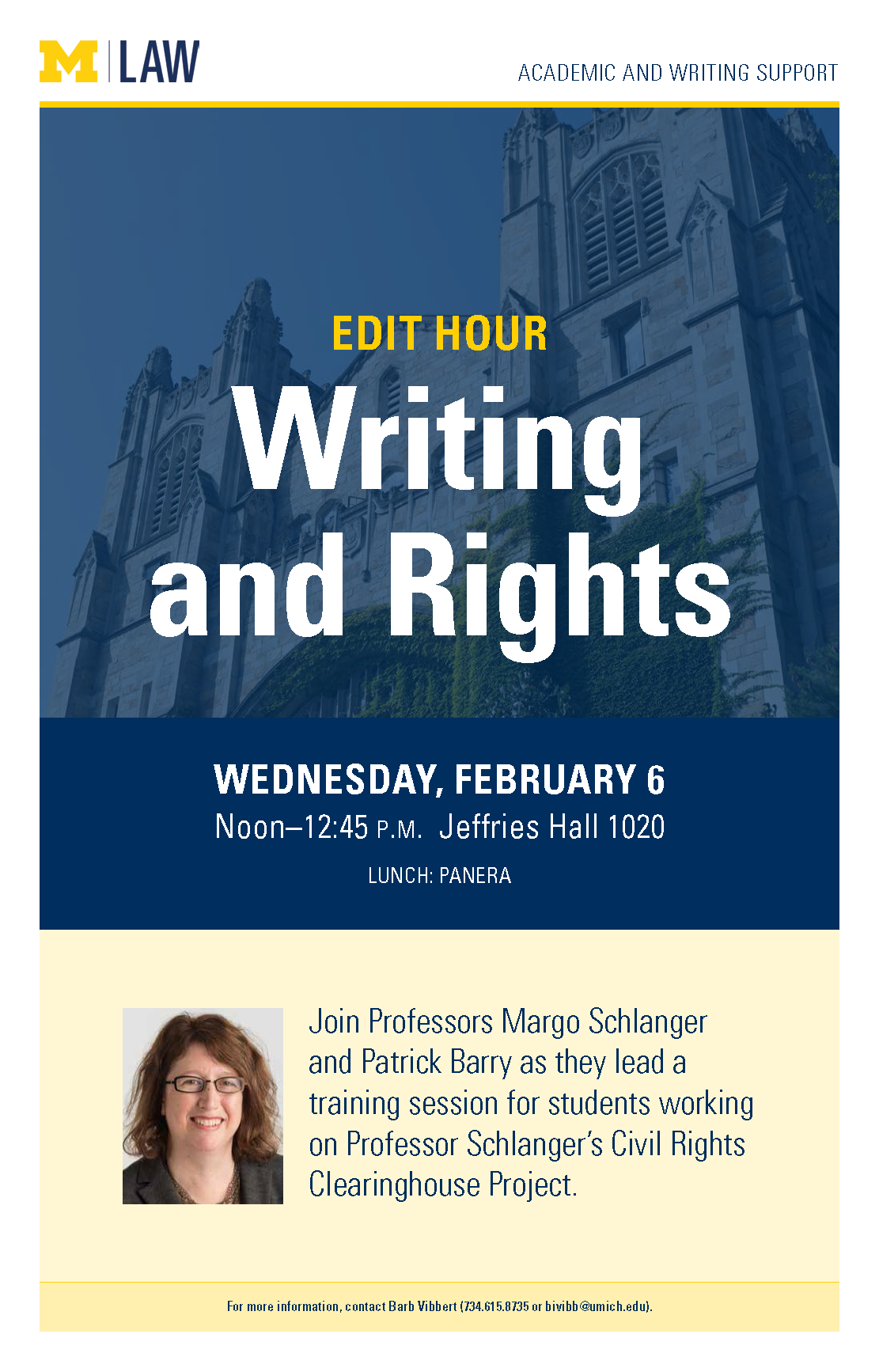 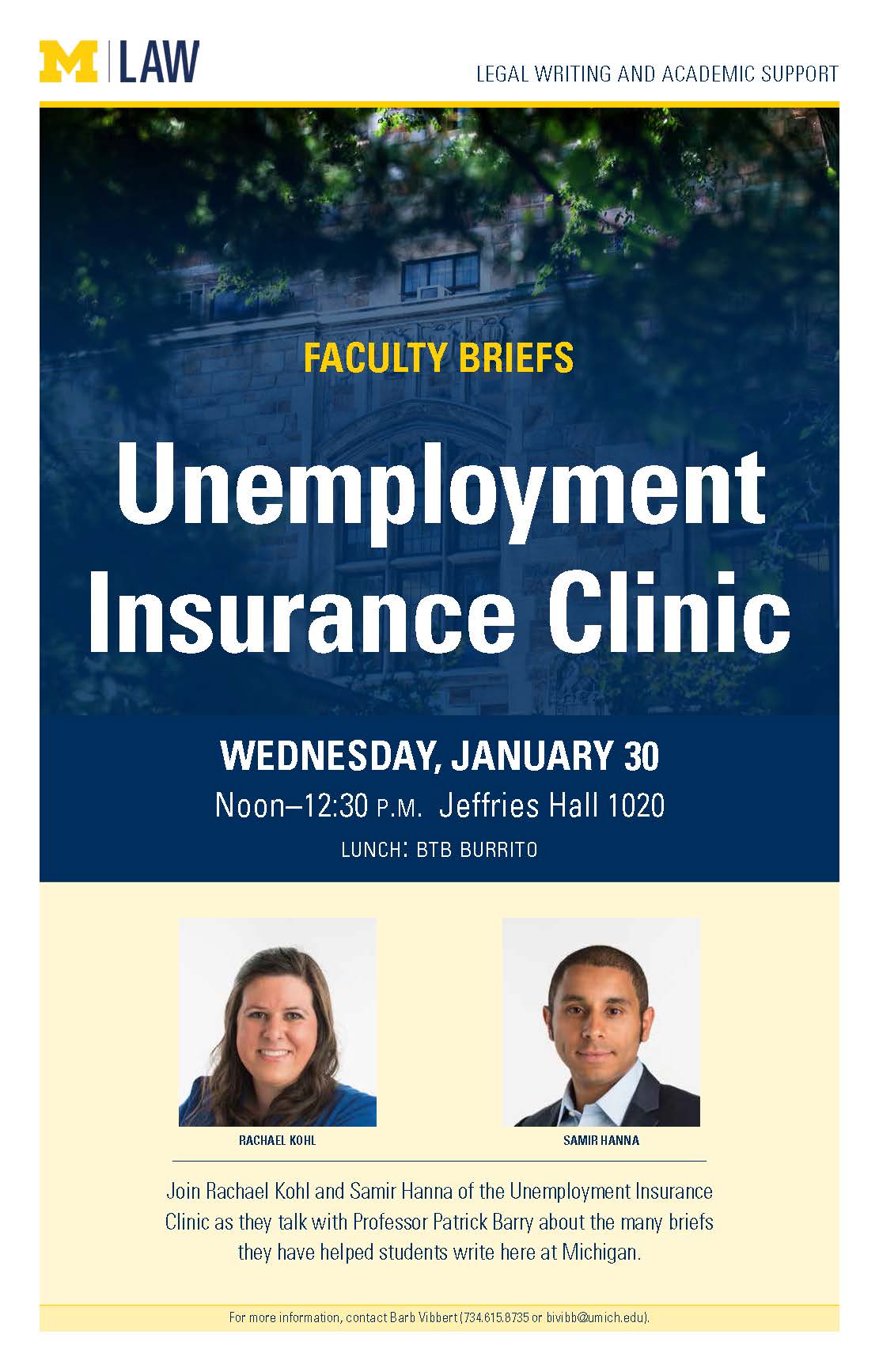 Join Rachel Kohl and Samir Hanna of the Unemployment Insurance Clinic as they talk with Professor Patrick Barry about the the many briefs they have helped students write here at Michigan. 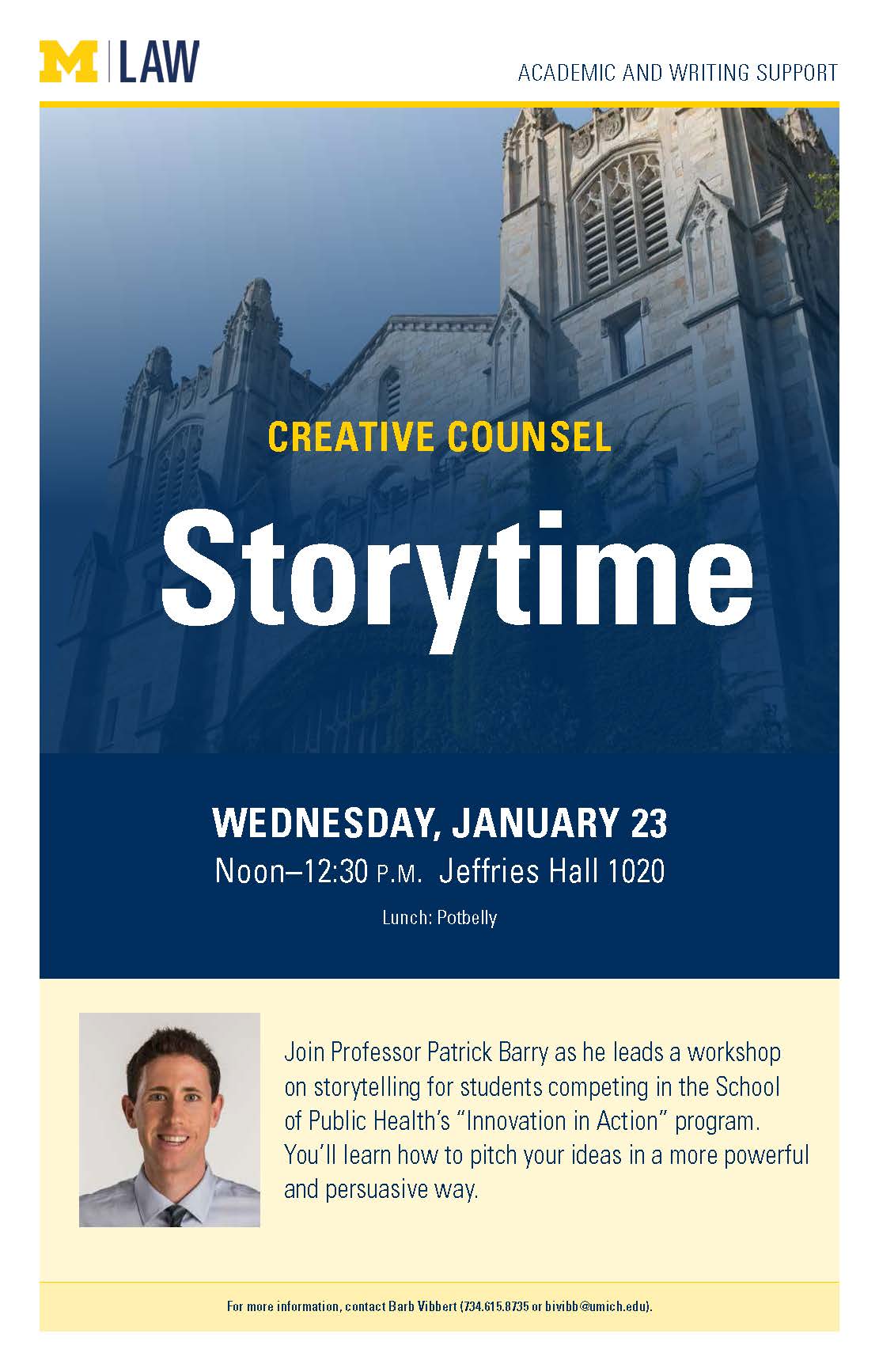 Join Professor Patrick Barry as he leads a workshop on storytelling for students competing in the School of Public Health’s “Innovation in Action” program.  You’ll learn how to pitch your ideas in a more powerful and persuasive way. 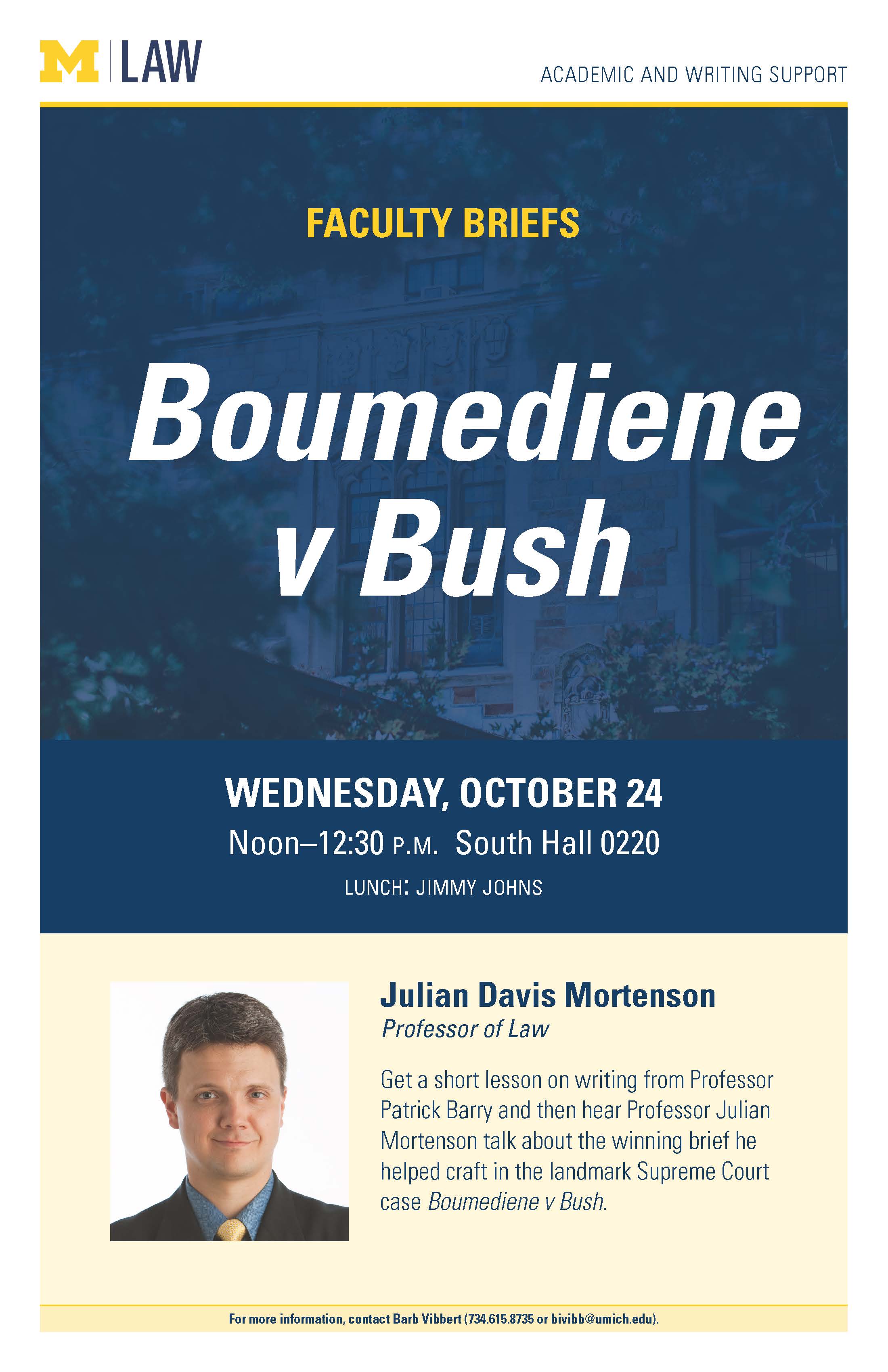 Get a short lesson on writing from Professor Patrick Barry and then hear Professor Julian Mortenson talk about the winning brief he helped craft in the landmark Supreme Court case Boumediene v Bush. 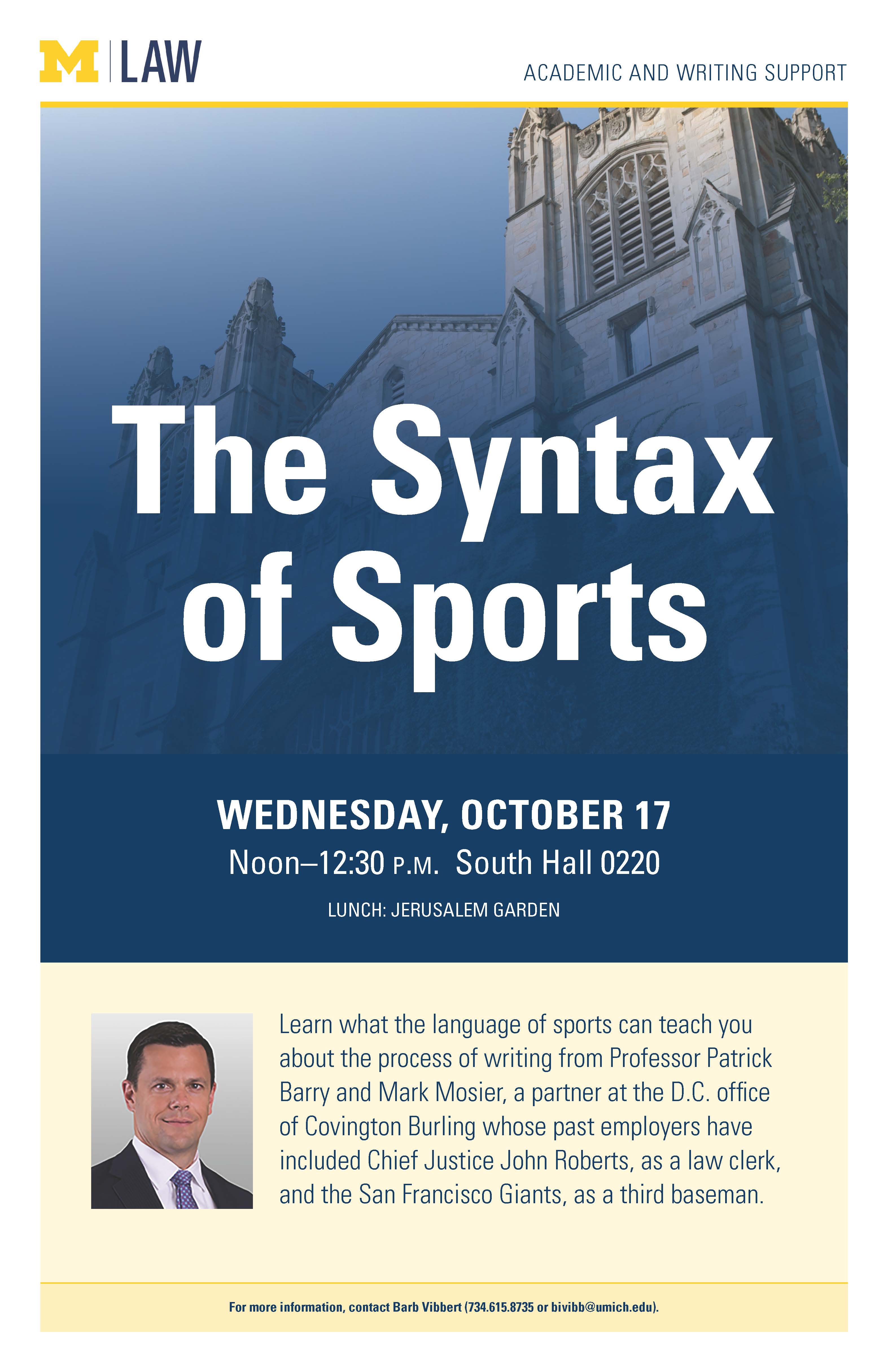 Learn what the language of sports can teach you about the process of writing from Professor Patrick Barry and Mark Mosier, a partner at the D.C. office of Covington Burling whose past employers have included Chief Justice John Roberts, as a law clerk, and the San Francisco Giants, as a third baseman. 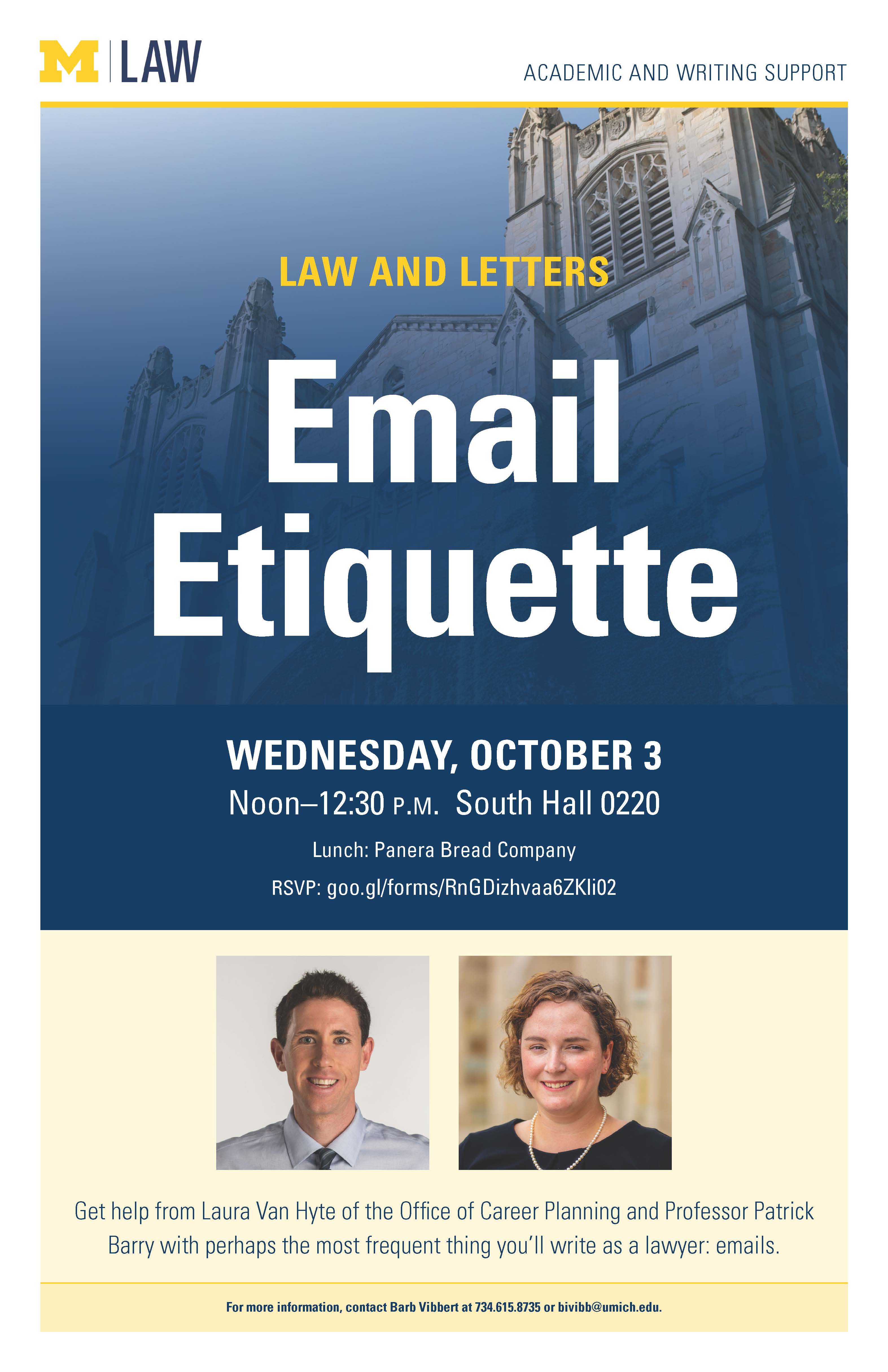 Get help from Laura Van Hyte of the Office of Career Planning and Professor Patrick Barry with perhaps the most frequent thing you’ll write as a lawyer: emails. 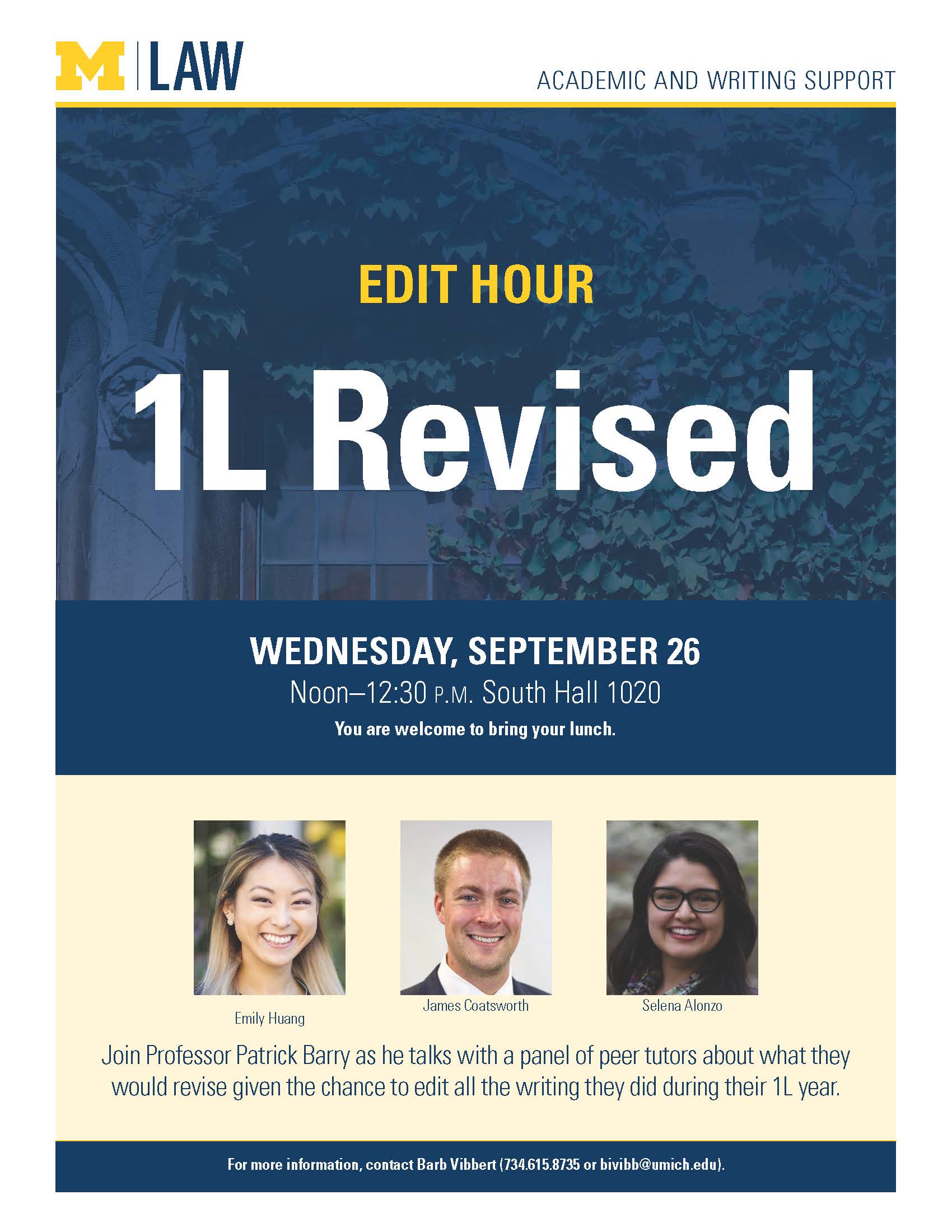 Join Professor Patrick Barry as he talks with a panel of peer tutors about what they would revise given the chance to edit all the writing they did during their 1L year. 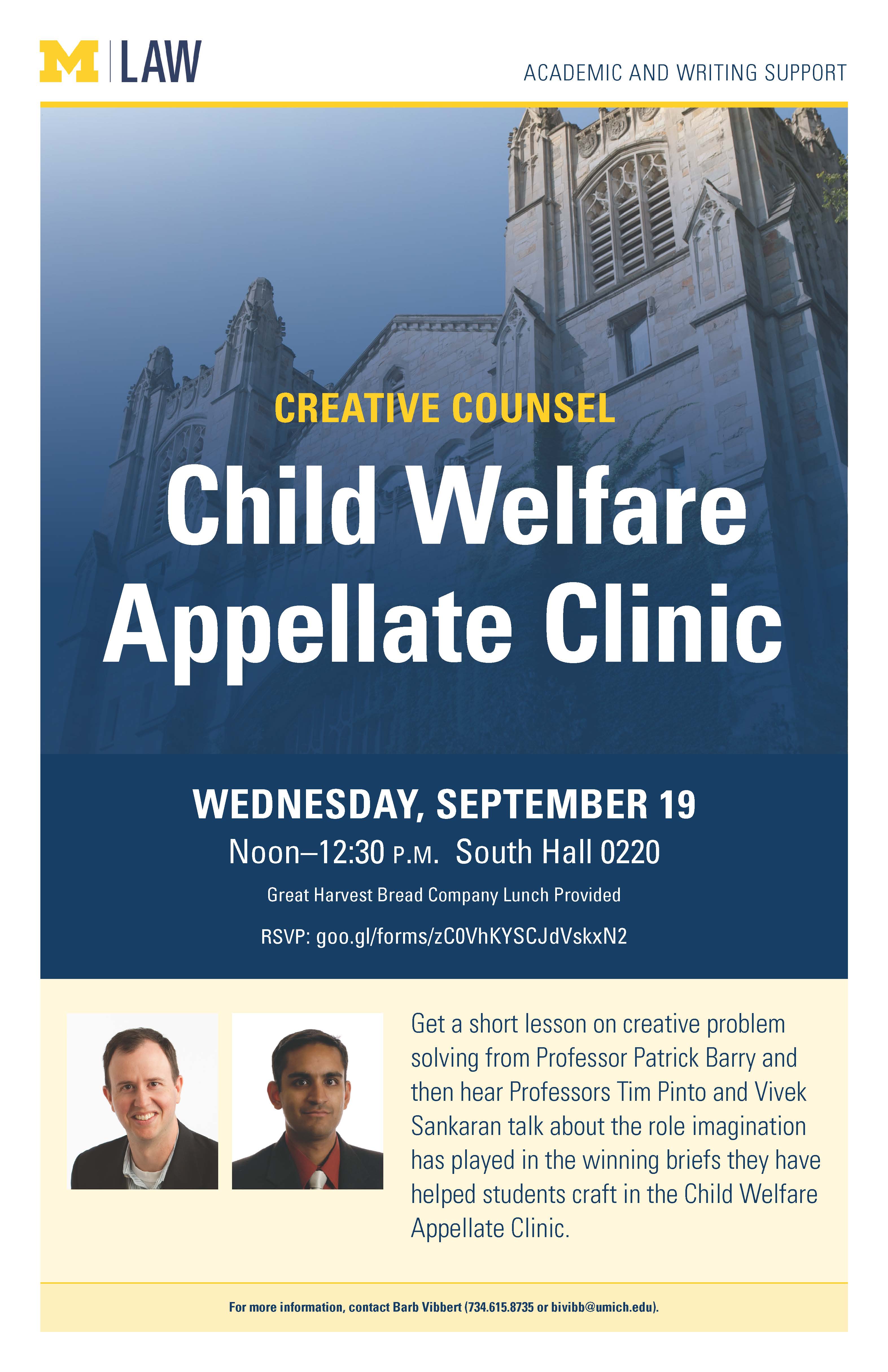 Get a short lesson on creative problem solving from Professor Patrick Barry and then hear Professors Tim Pinto and Vivek Sankaran talk about the role imagination has played in the winning briefs they have helped students craft in the Child Welfare Appellate Clinic. 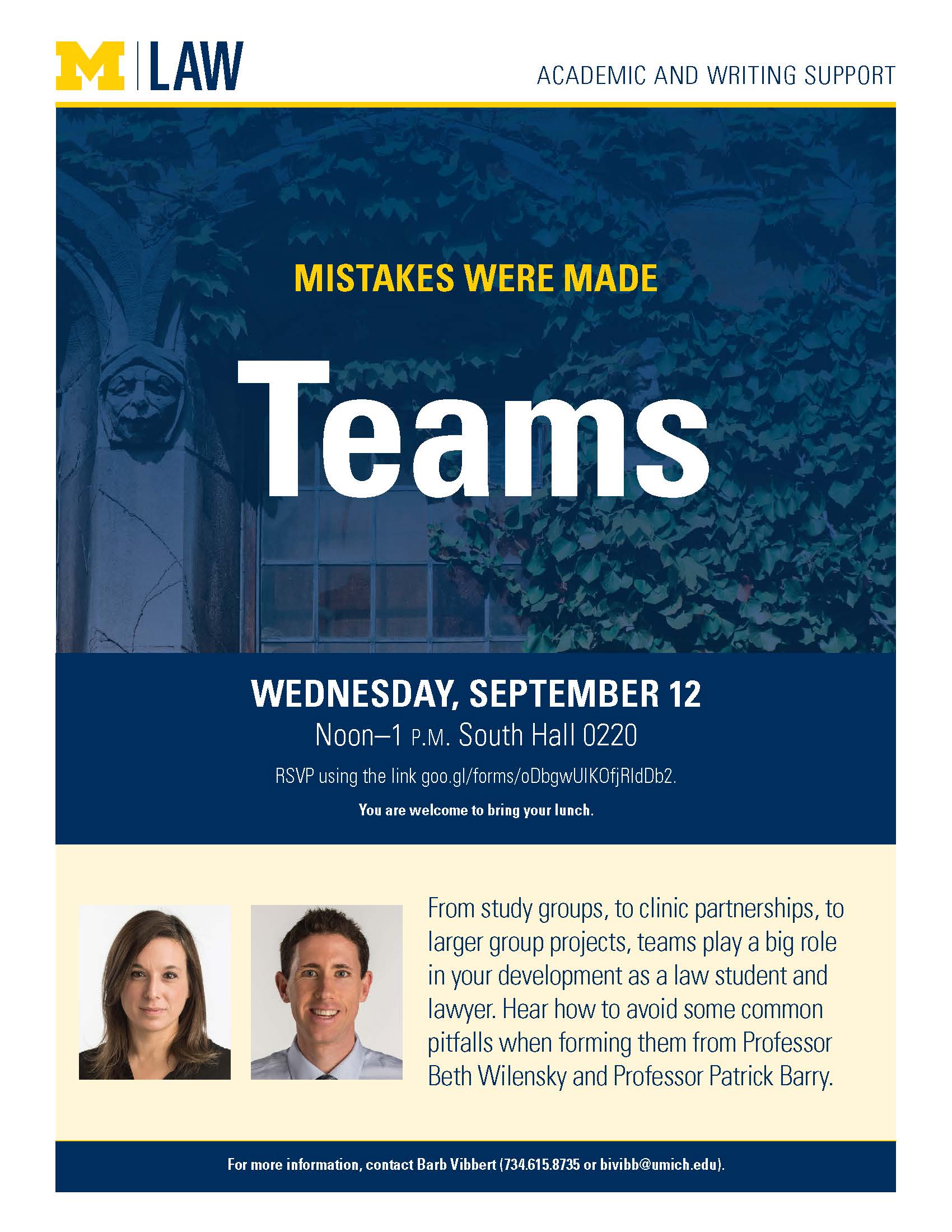 From study groups to clinic partnerships, to larger group projects, teams play a big role in your development as a law student and lawyer.  Hear how to avoid some common pitfalls when forming them from Professor Beth Wilensky and Professor Patrick Barry. 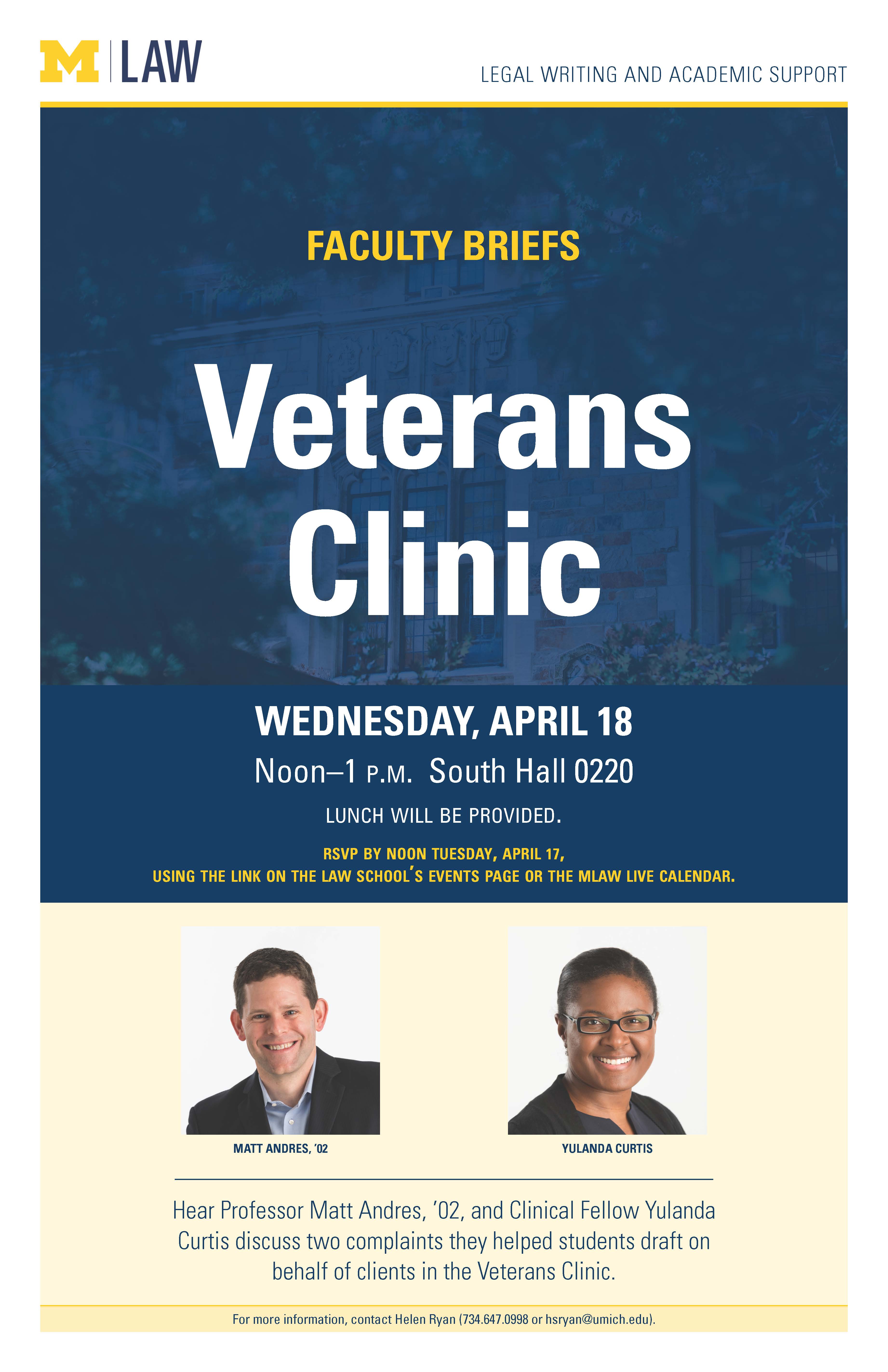 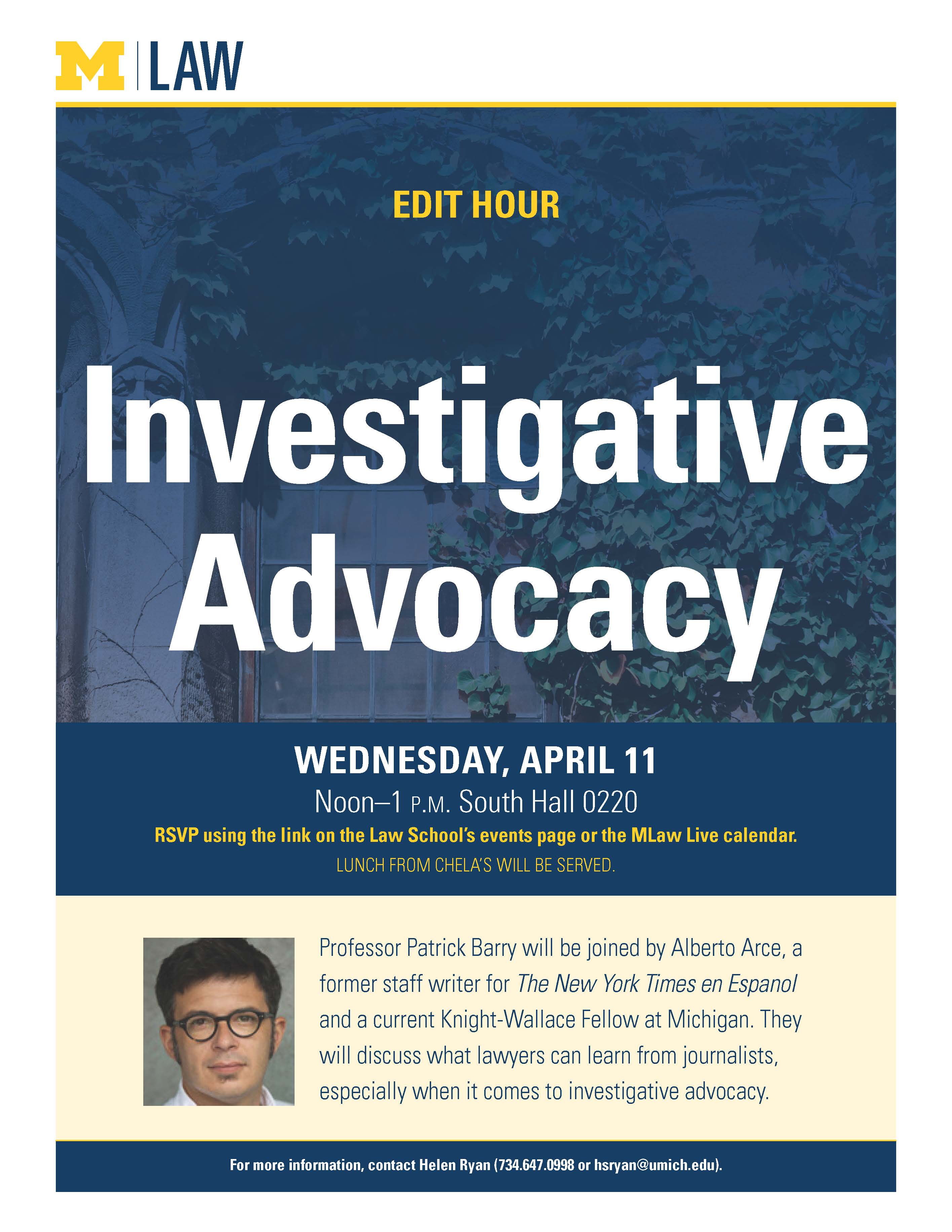 Professor Patrick Barry will be joined by Alberto Arce, a Former staff writer for The New York Times en Espanol and a current Kight-Wallace Fellow at Michigan.  They will discuss what lawyers can learn from journalists, especially when it comes to investigative advocacy. 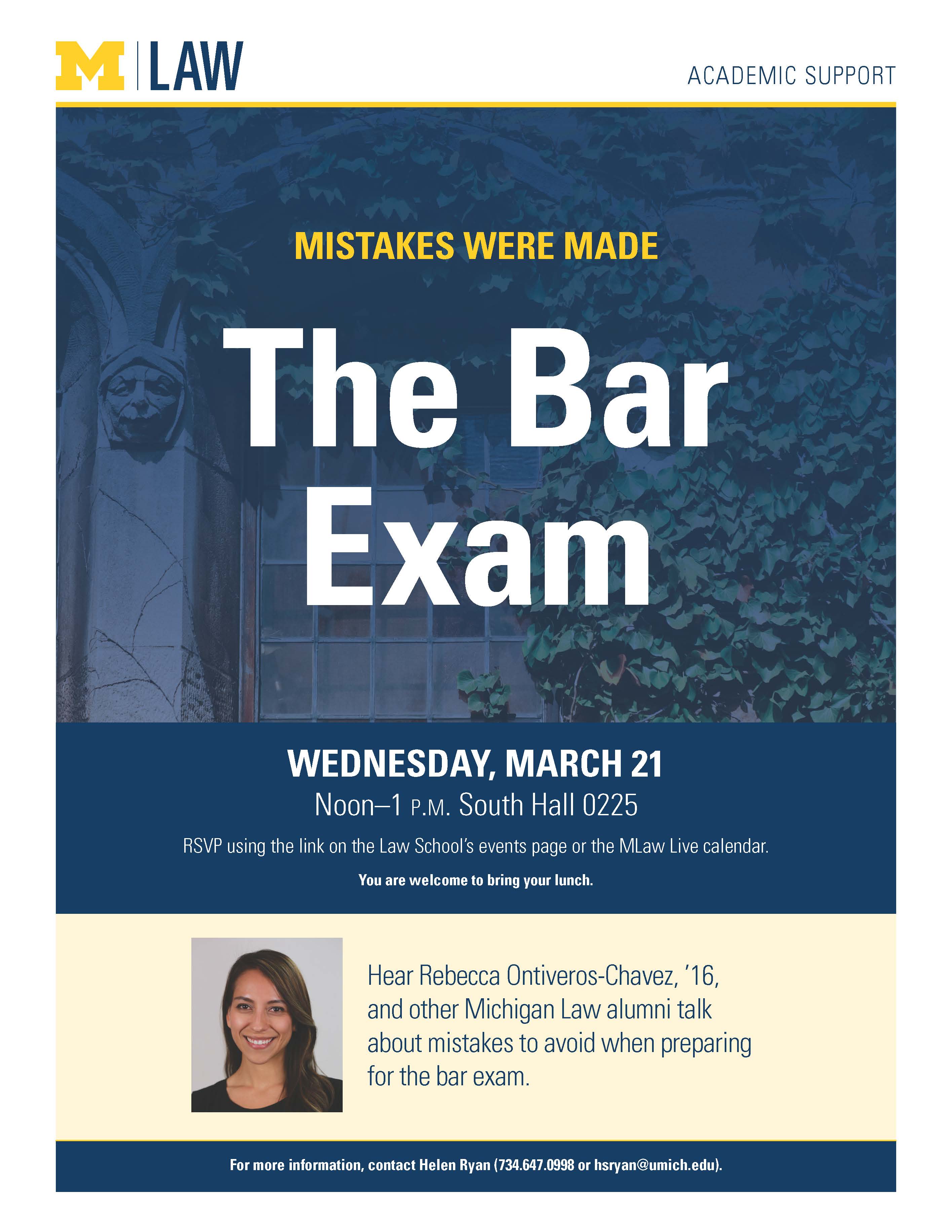 Hear Rebecca Ontiveros-Chavez, ’16, and other Michigan Law alumni talk about mistakes to avoid when preparing for the bar exam. 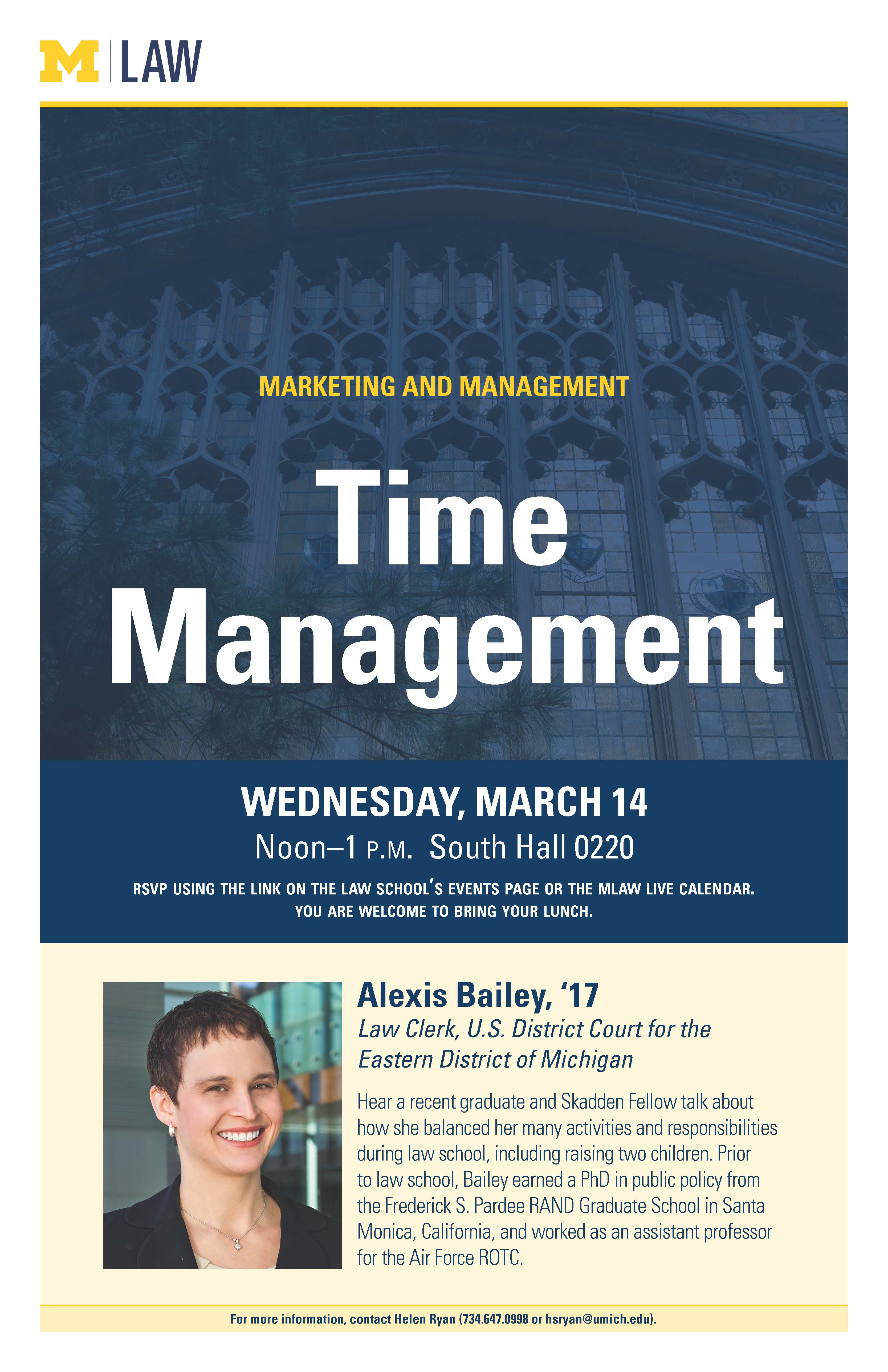 Hear a recent graduate and Skadden Fellow talk about how she balanced her many activities and responsibilities during law school, including raising two children. Prior to law school, Bailey earned a PhD in public policy from the Frederick S. Pardee RAND Graduate School in Santa Monica, California, and worked as an assistant professor for the Air Force ROTC. 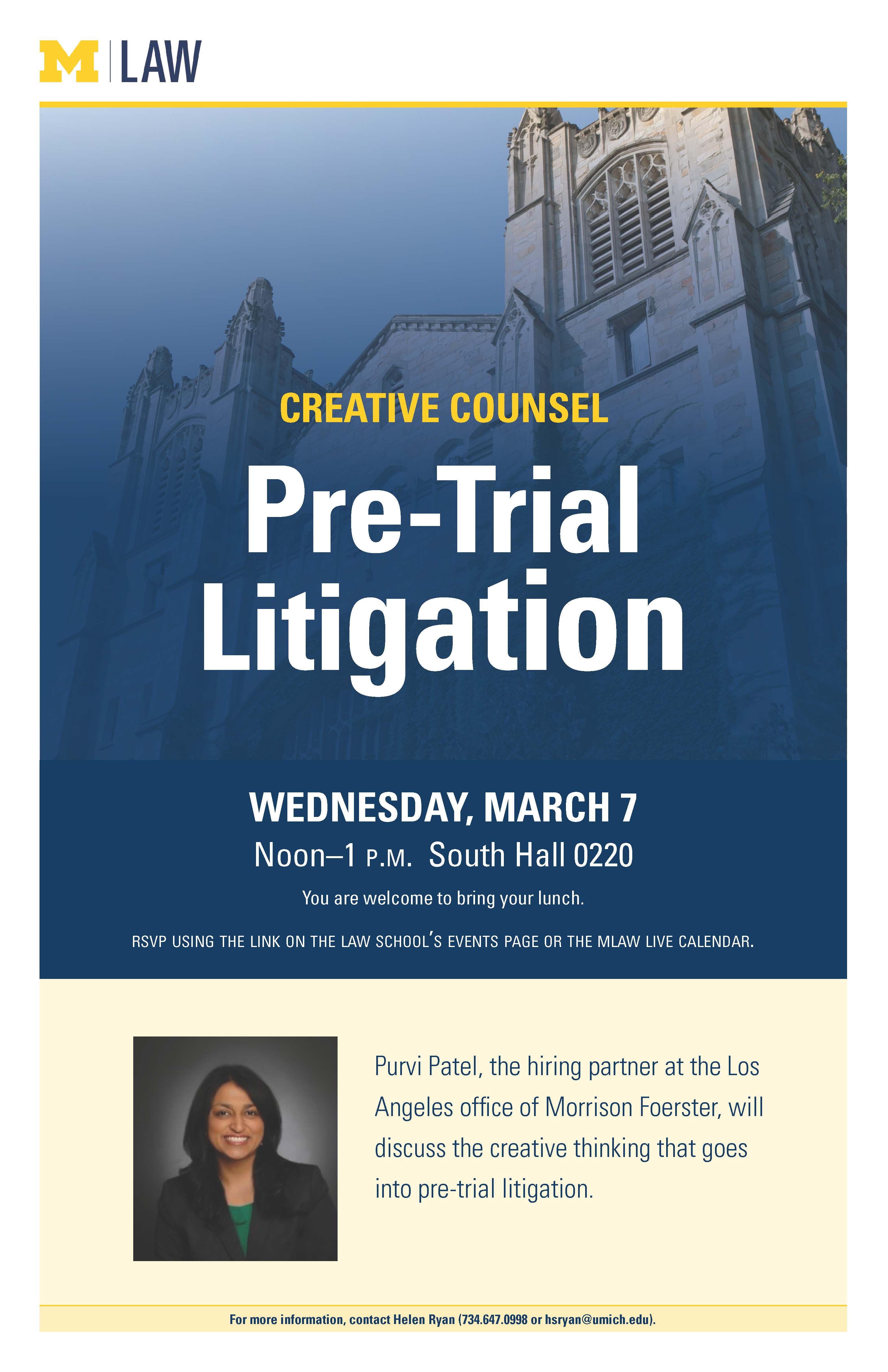 Hear The Hon. David R. Grand, ’98, discuss the creativity that goes into helping parties settle cases before trial and why it is important to learn to think imaginatively about legal problems. 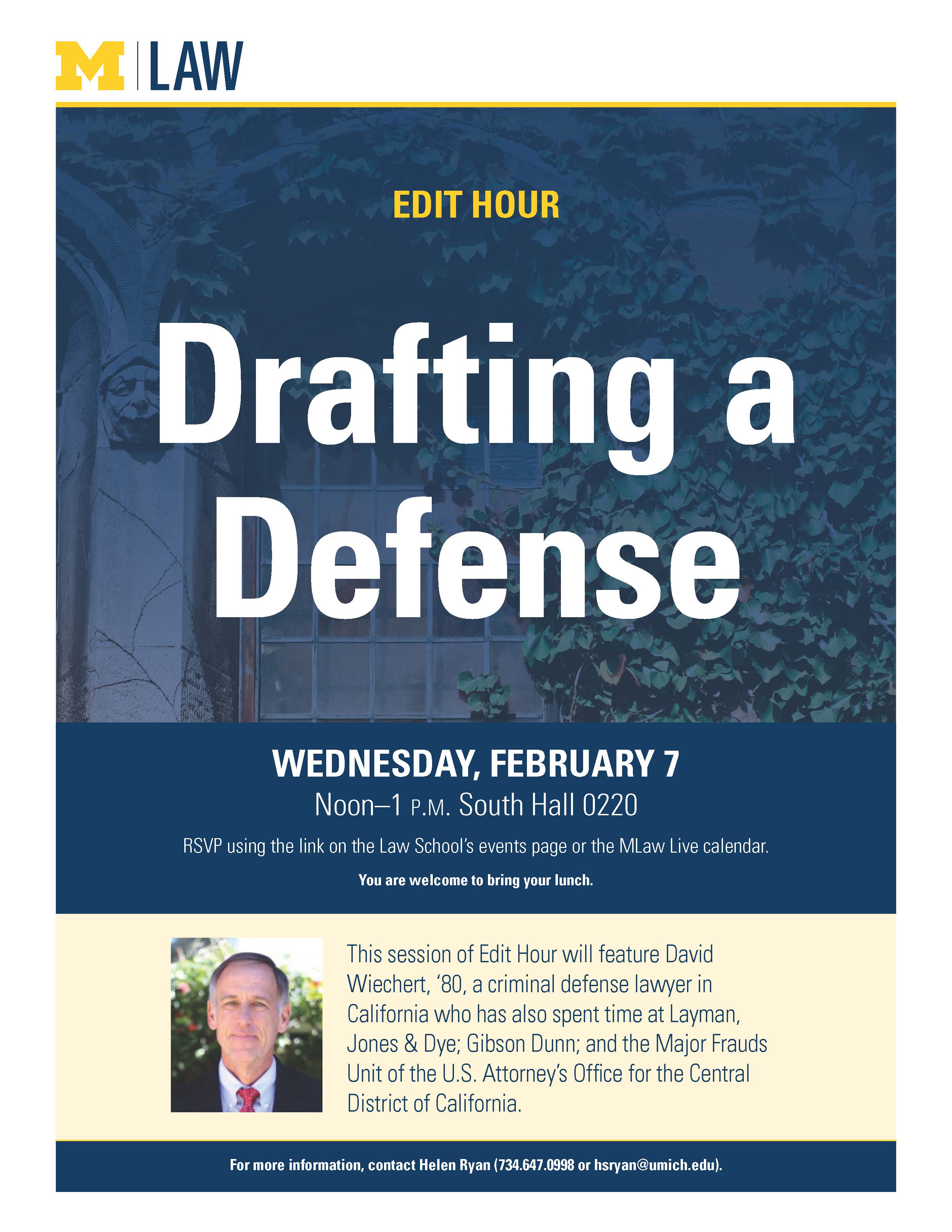 This session of Edit Hour will feature David Wiechert, ‘80, a criminal defense lawyer in California who has also spent time at Layman, Jones & Dye; Gibson Dunn; and the Major Frauds Unit of the U.S. Attorney’s Office for the Central District of California. 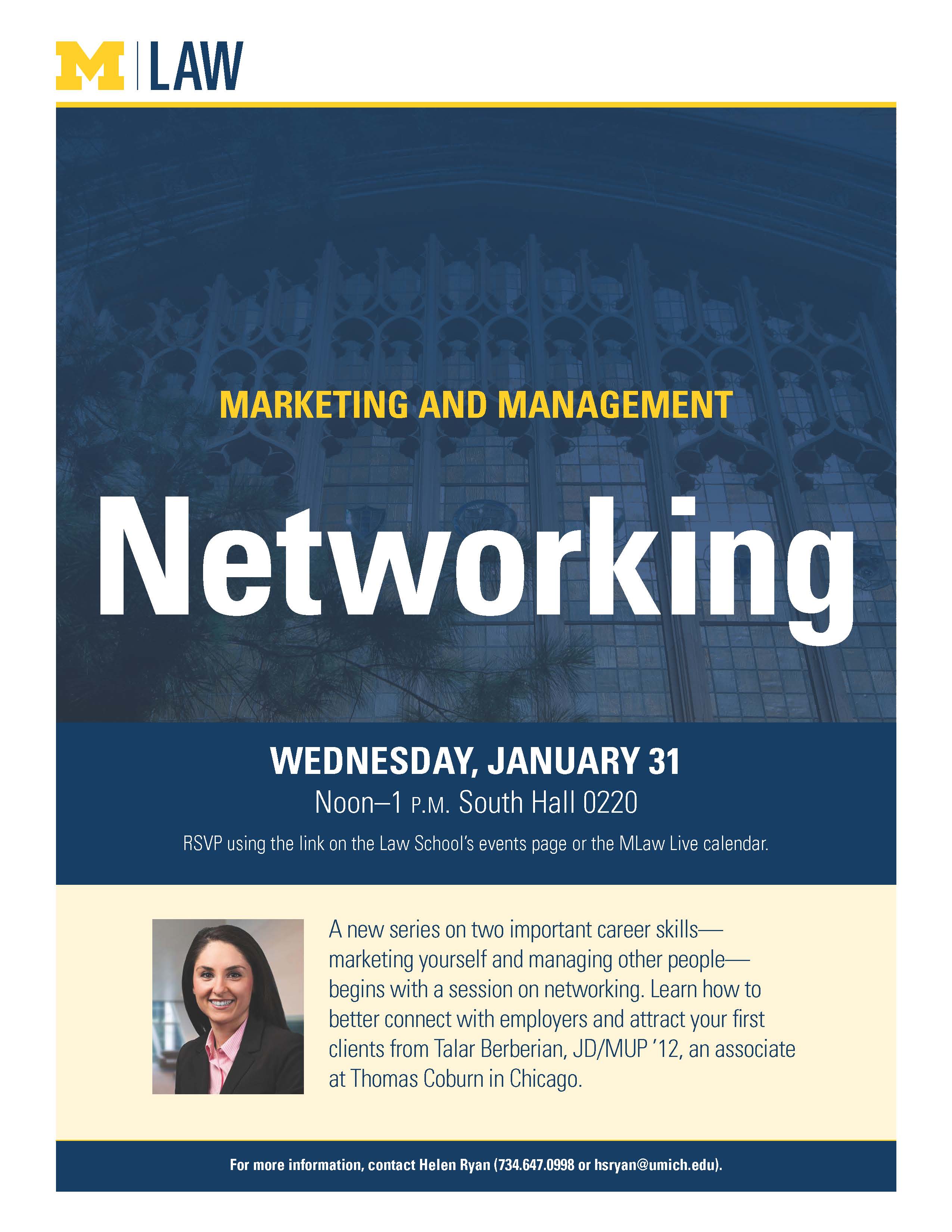 A new series on two important career skills— marketing yourself and managing other people— begins with a session on networking. Learn how to better connect with employers and attract your first clients from Talar Berberian, JD/MUP ’12, an associate at Thomas Coburn in Chicago. 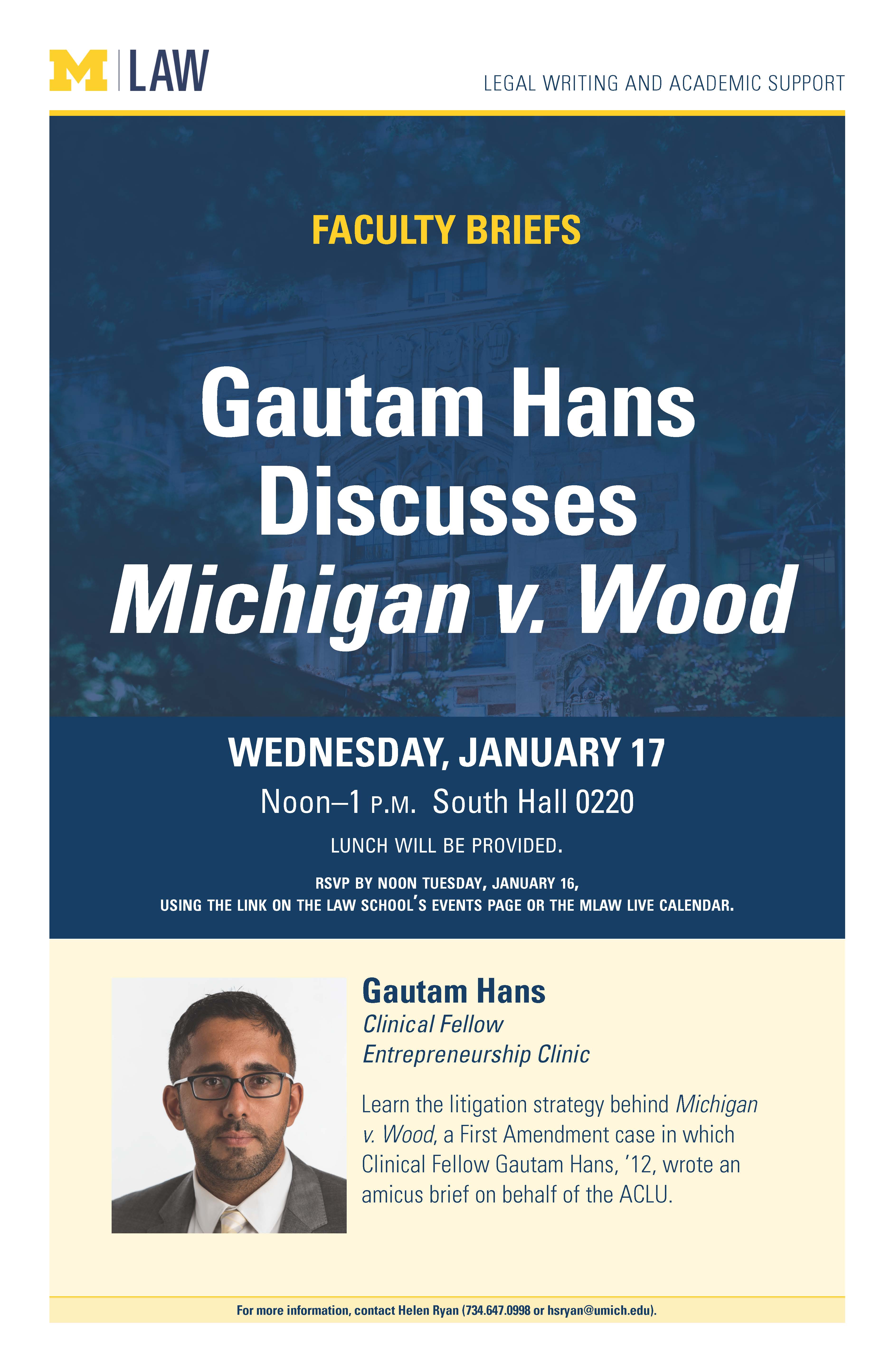 Learn the litigation strategy behind Michigan v. Wood, a First Amendment case in which Clinical Fellow Gautam Hans, ’12, wrote an amicus brief  on behalf of the ACLU. 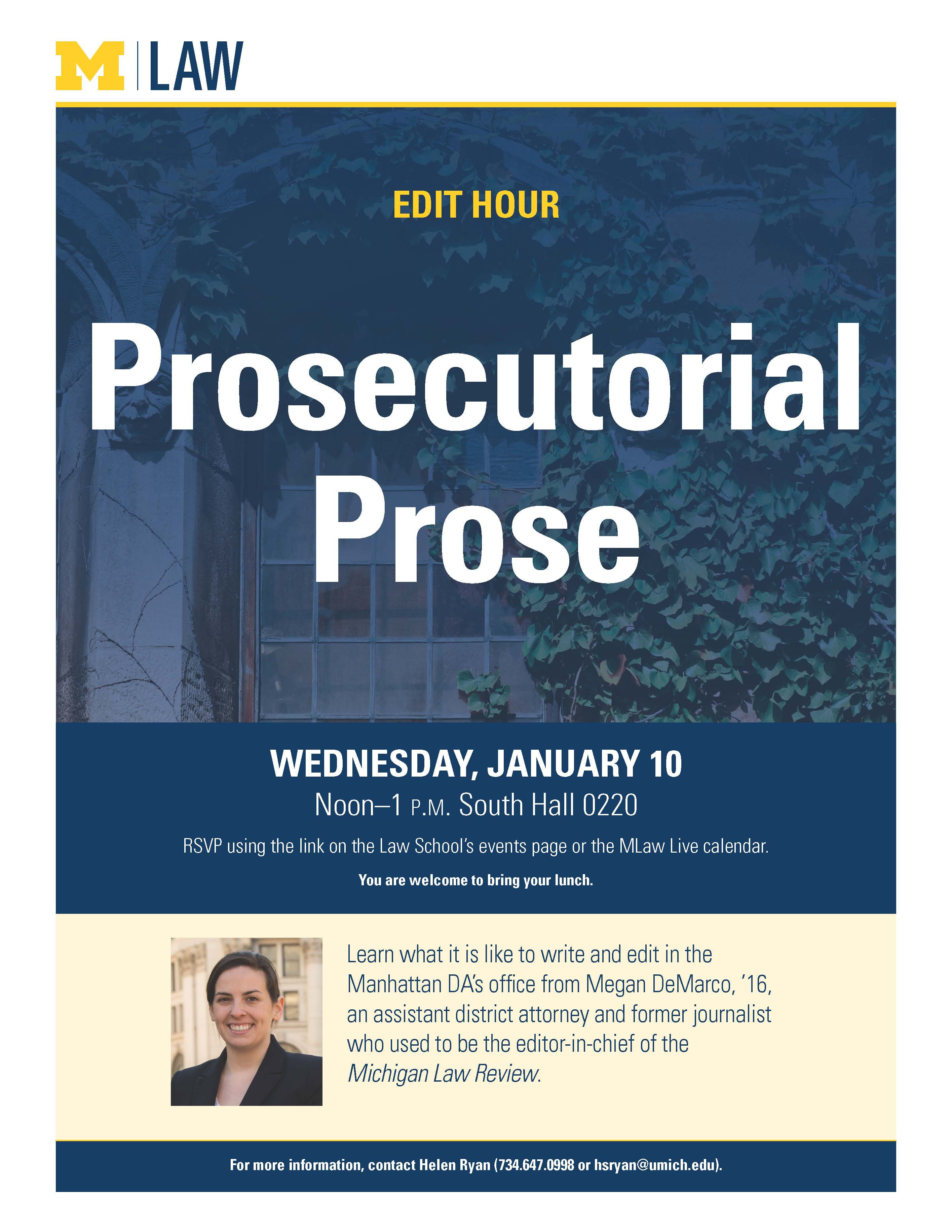 Learn what it is like to write and edit in the Manhattan DA’s office from Megan DeMarco, ’16, an assistant district attorney and former journalist who used to be the editor-in-chief of the Michigan Law Review. 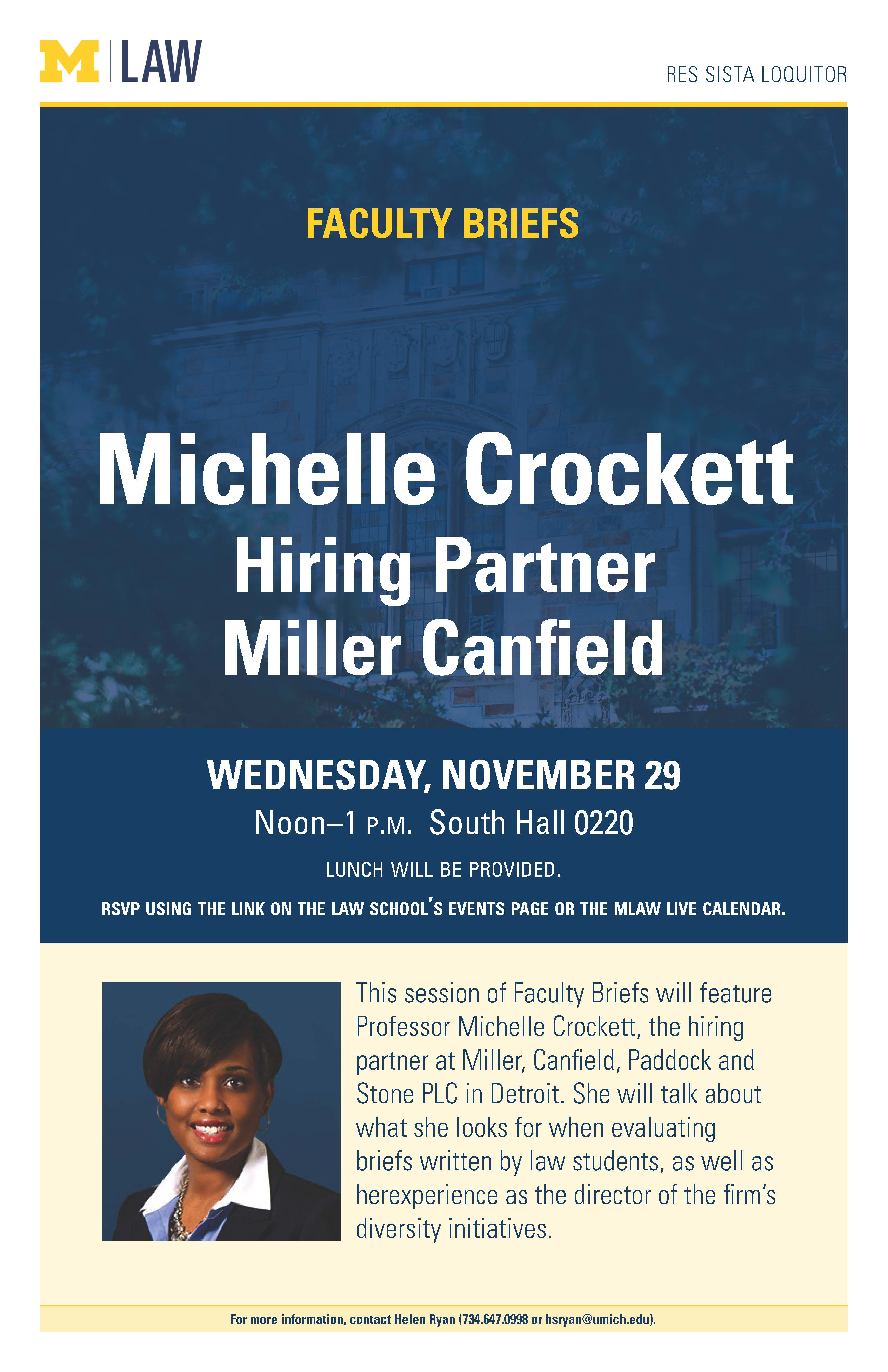 This session of Faculty Briefs will feature Professor Michelle Crockett, the hiring partner at Miller, Canfield, Paddock and Stone PLC in Detroit.  She will talk about what she looks for when evaluating briefs written by law students, as well as her experience as the director of the firm's diversity initiatives. 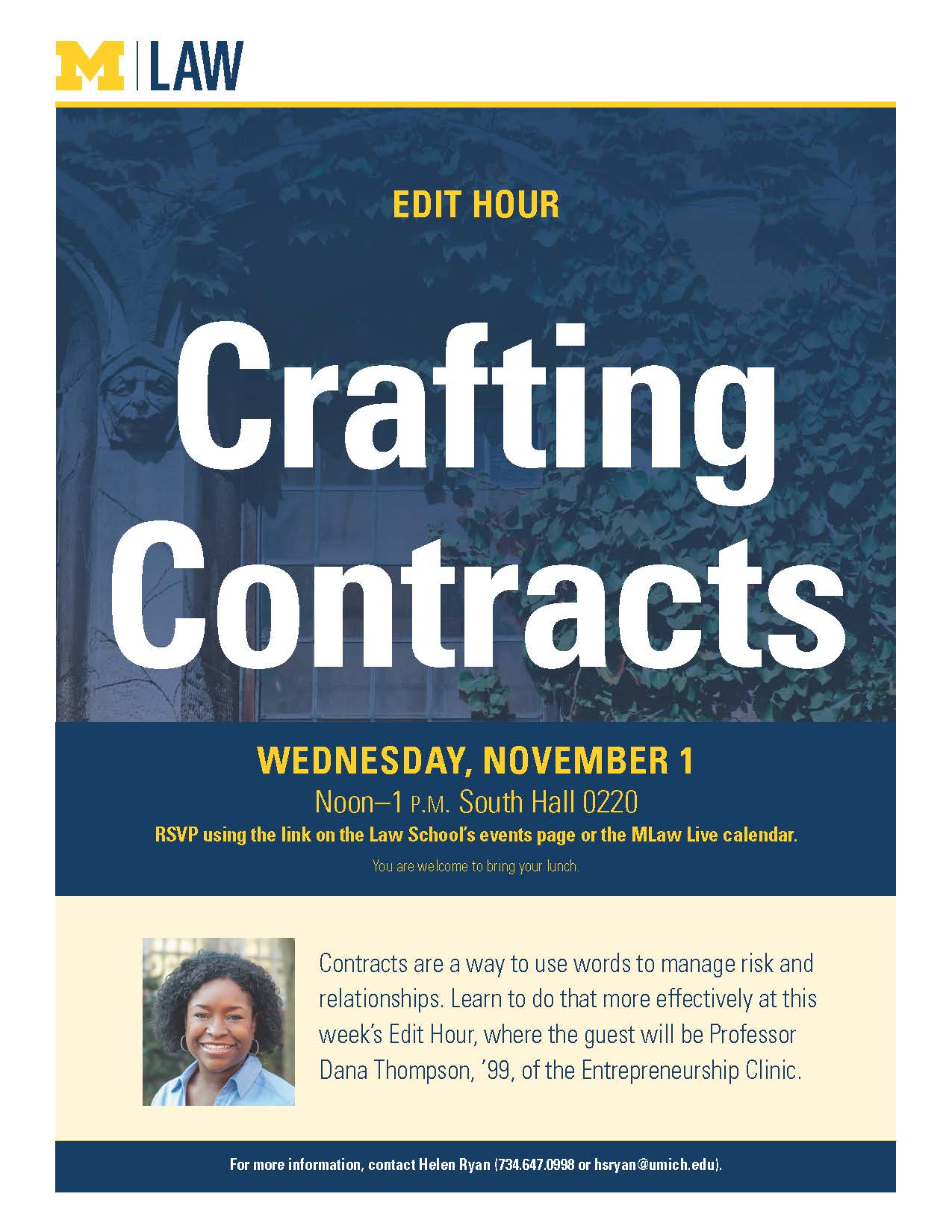 Contracts are a way to use words to manage risk and relationships.  Learn to do that more effectively at this week's Edit Hour, where the guest will be Professor Dana Thompson, '99, of the Entrepreneurship Clinic. 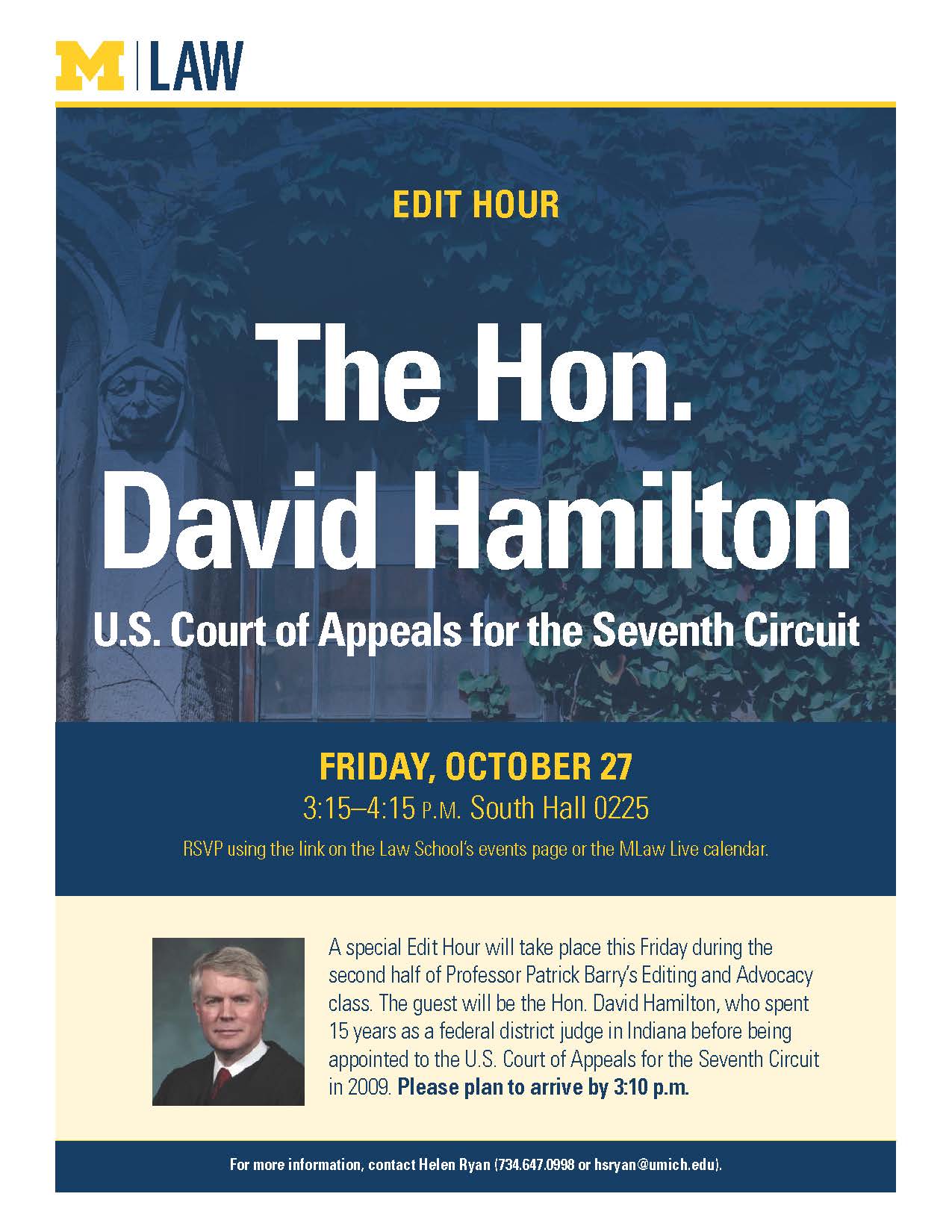 A special Edit Hour will take place this Friday during the second half of Professor Patrick Barry's Editing and Advocacy class.  The guest will be the Hon. David Hamilton, who spent 15 years as a federal district judge in Indiana before being appointed to the U.S. Court of Appeals for the Seventh Circuit in 2009. 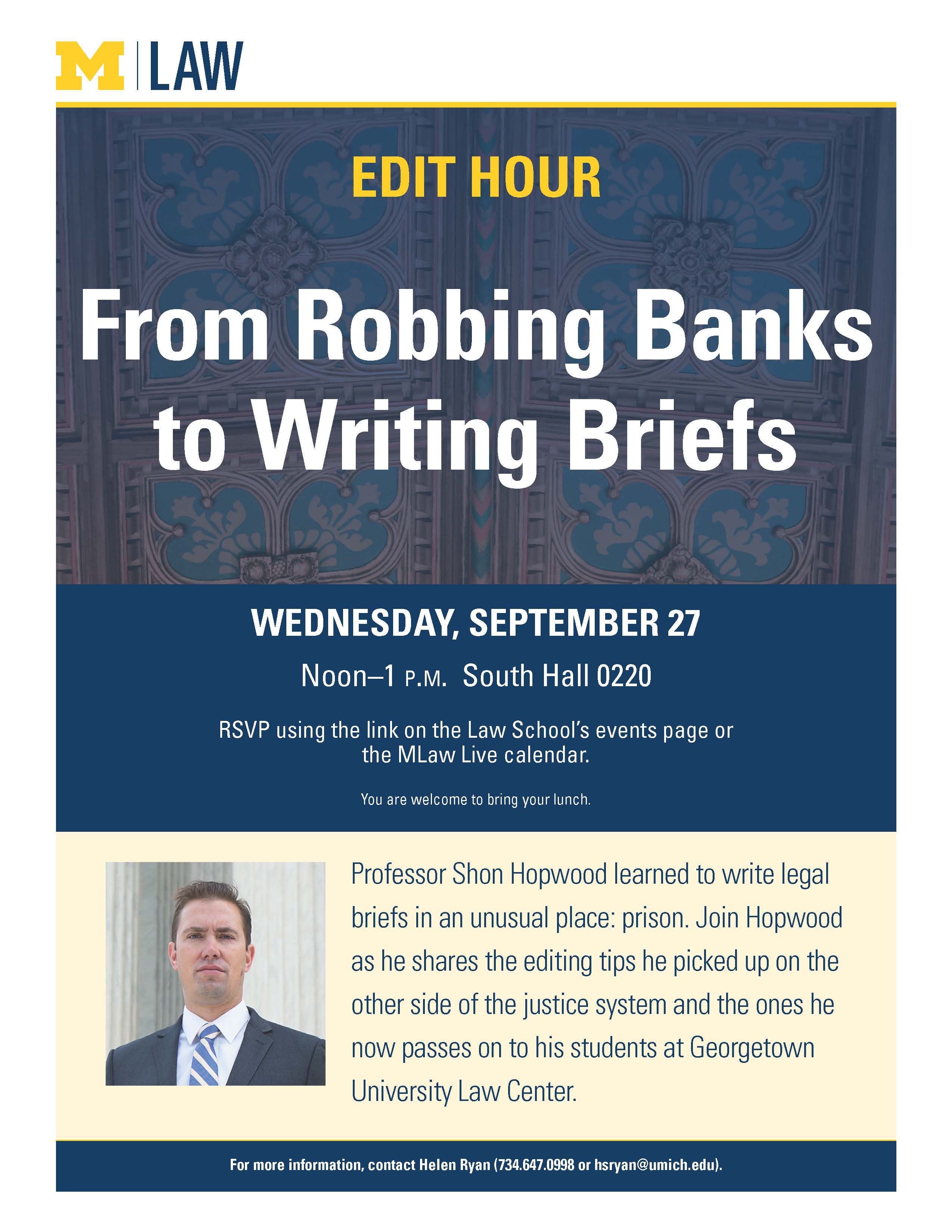 Professor Shon Hopwood learned to write legal briefs in an unusual place: prison.  Join Hopwood as he shares the editing tips he picked up on the other side of the justice system and the ones he now passes on to his students at Georgetown University Law Center. 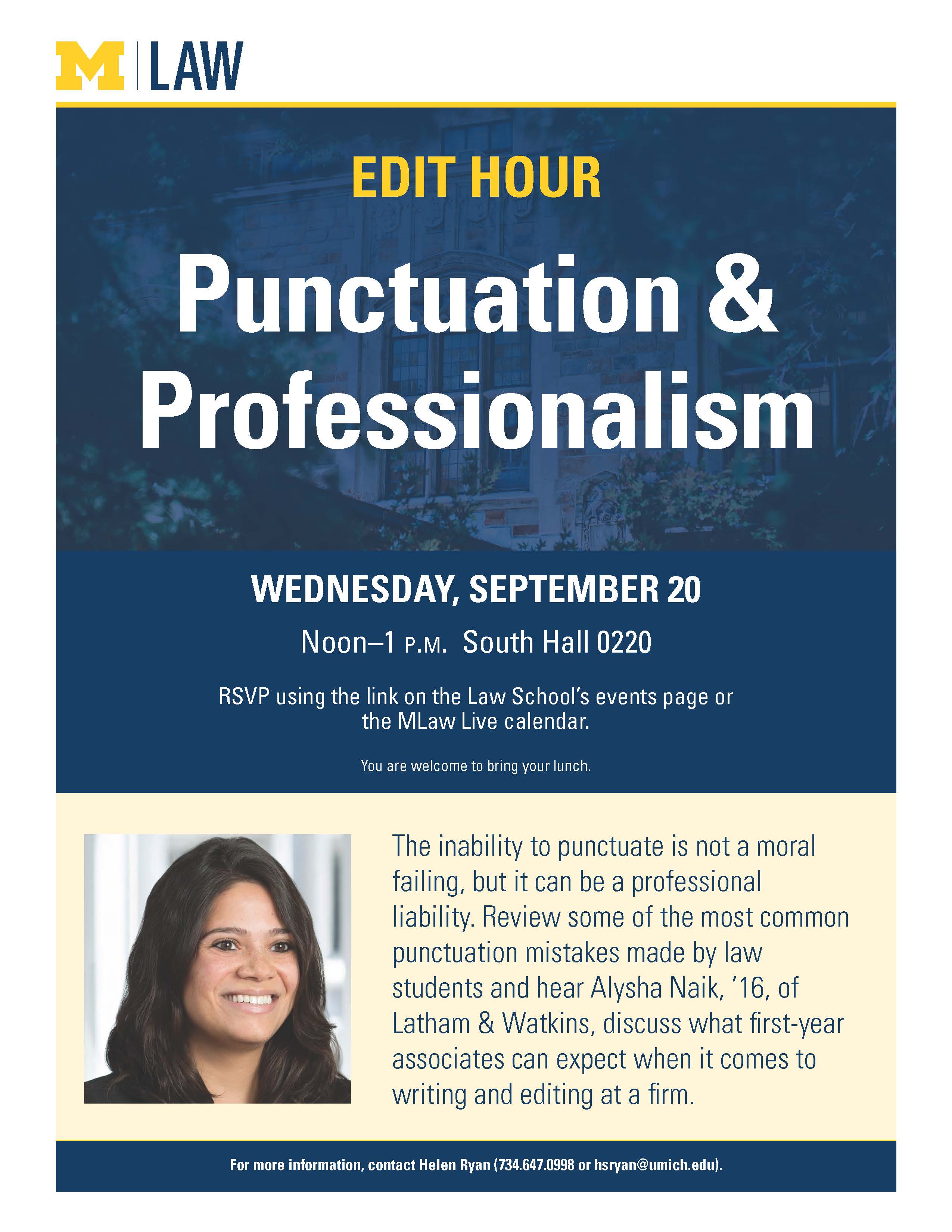 The inability to punctuate is not a moral failing, but it can be a professional liability. Review some of the most common punctuation mistakes made by law students and hear Alysha Naik, ’16, of Latham & Watkins, discuss what first-year associates can expect when it comes to writing and editing at a firm. 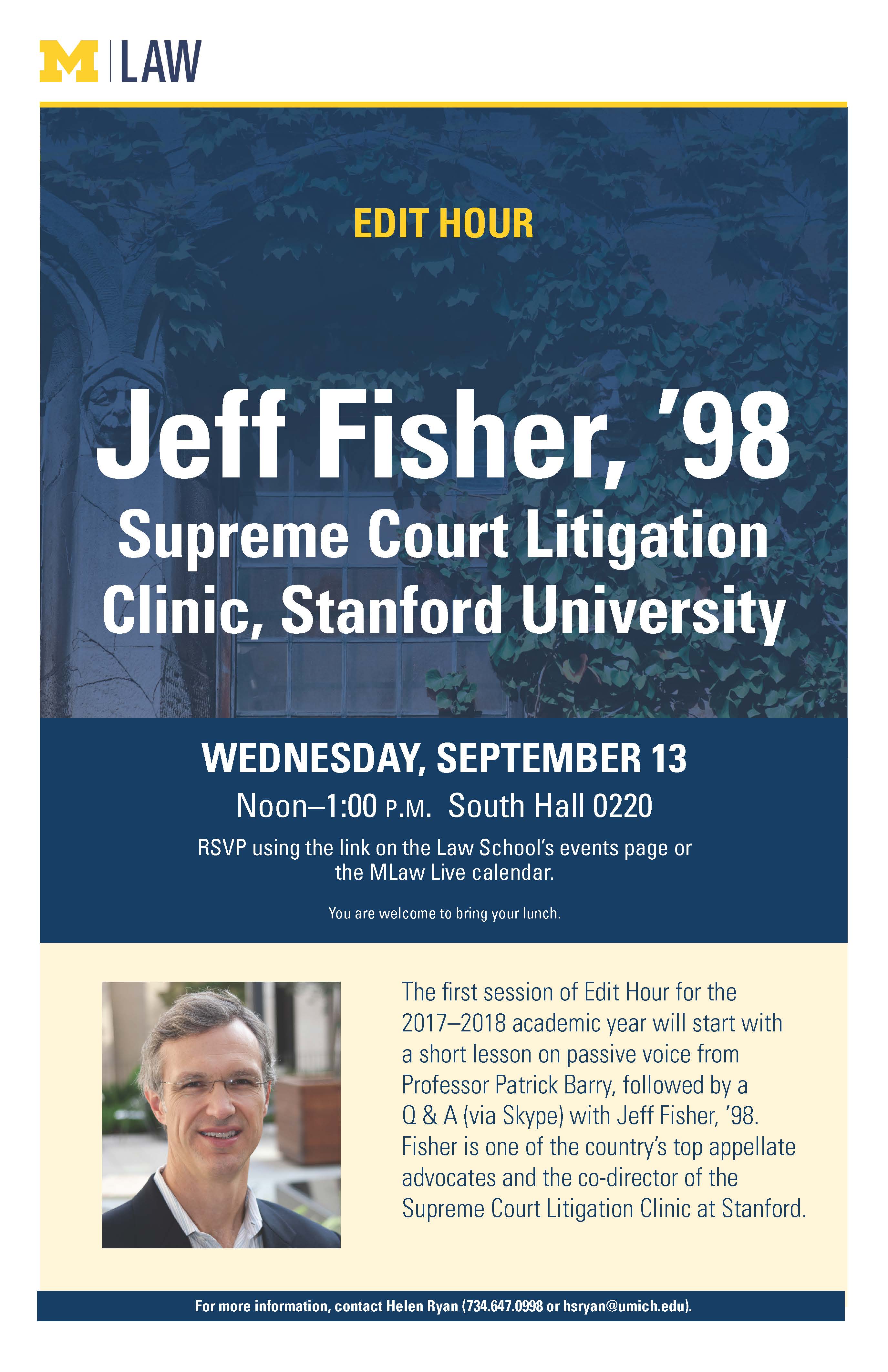 The first session of Edit Hour for the 2017–2018 academic year will start with a short lesson on passive voice from Professor Patrick Barry, followed by a Q & A (via Skype) with Jeff Fisher, ’98. Fisher is one of the country’s top appellate advocates and the co-director of the Supreme Court Litigation Clinic at Stanford.

[Important note: Good Sentences does not endorse any of the opinions contained in the sentences in the collection. The only thing we endorse is the elegantly effective way these sentences were constructed.]